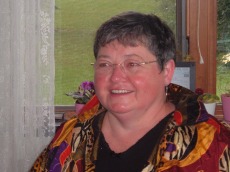 I am a tenth generation American, descended from a family that has been working a farm that was deeded to us by William Penn.  The country has changed around us but we have held true.  I stand in my grandmother’s kitchen, look down the valley to her brother’s farm and see my great-great-great-great-great-grandmother Hannah standing on the porch.  She is holding the baby, surrounded by four other children, and saying goodbye to her husband and oldest son who are going off to fight in the Revolutionary War.  The war is twenty miles away and her husband will die fighting.  We are not the Daughters of the American Revolution; we were its mothers.

My father, Milton C. Woodlen, got his doctorate from Temple University in the 1940’s when—in his words—“a doctorate still meant something.”  He became an education professor at West Chester State Teachers College, where my mother, Elizabeth Hope Copeland, had graduated.  My mother raised four girls and one boy, of which I am the middle child.  My parents are deceased and my siblings are estranged.

My fiancé, Robert H. Dobrow, was a fighter pilot in the Marine Corps.  In 1974, his plane crashed, his parachute did not open, and we buried him in a cemetery on Long Island.  I could say a great deal about him, or nothing; there is no middle ground.  I have loved other men; Bob was my soul mate.

The single greatest determinate of who I am and what my life has been is that I inherited my father’s gene for bipolar disorder, type II.  [I no longer believe that bipolar disorder is genetic.  After I fully recovered from taking antidepressants, I also fully recovered from all symptoms of bipolar disorder.  ACW July 2012]  Associated with all bipolar disorders is executive dysfunction, a learning disability that interferes with the ability to sort and organize.  Despite an I.Q. of 139, I failed twelve subjects and got expelled from high school and prep school.  I attended Syracuse University and Onondaga Community College and got an associate’s degree after twenty-five years.  I am nothing if not tenacious.

Gifted with intelligence, constrained by disability, and compromised by depression, my employment was limited to entry level jobs.  Being female in the 1960’s meant that I did office work—billing at the university library, calling out telegrams at Western Union, and filing papers at a law firm.  During one decade, I worked at about a hundred different places as a temporary secretary.  I worked for hospitals, banks, manufacturers and others, including the county government.  I quit the District Attorney’s Office to manage a gas station; it was more honest work.

After Bob’s death, I started taking antidepressants.  Following doctor’s orders, I took them every day for twenty-six years.  During that time, I attempted suicide a dozen times and was hospitalized about fifty times for a total of approximately three years.  By 1991, I was unable to work, homeless, and declared fully and permanently disabled.  After a severe suicide attempt in 1999, I spent a month on life support with no expectation of survival.  Two years later, I was the youngest person in a large elder residence, bed-ridden and in constant despair.  I had no family or friends, no money, and no church.  My life was a constant stream of medications, ambulances, emergency rooms, IVs, catheters and officially approved torture by the medical industry, so I stopped taking all medications and prepared to die.  Instead of dying, I began to get better.  Physicians prescribing pharmaceuticals had been killing me.

I went through acute cold-turkey drug withdrawal, then a year or two of detoxification from drugs.  I discovered that doctors doing drugs had so severely impaired my immune system that I no longer can take any drugs for anything.  This is problematic given that I have chronic renal failure, nephrogenic diabetes insipidus, diabetes mellitus, labile hypertension, right bundle branch block, left ventricular hypertension, severe obstructive sleep apnea, celiac disease, spinal arthritis, pulmonary fibrosis, fibromyalgia, chronic fatigue syndrome, and am hyper-reactive to all sorts of things.

I learned that the trigger for depression is the perception of powerlessness, so I began to act with power.  I filed complaints with higher government agencies against lower government agencies, got the complaints investigated, and maintained pressure until there was a final resolution.  As a result of my actions, employees have been fired, downgraded or transferred.  Agencies have had to pay.

I have become an activist on behalf of God’s people—elderly, disabled, poor people, of which I am one.  I ask for nothing more than the law requires.  My activism is solely to get substandard housing, transportation, and other services brought up to the level required by federal law.  I work for God and answer to no man.

I had been a lukewarm Christian all my life but after I stopped taking drugs, I started reading the Holy Bible.  I read it through three times, then continued on to read Living Buddha, Living Christ, the Wiccan Bible, the Bhagavad Gita and the Holy Koran.  I have come to understand that there is One Great Divinity, variously called Brahman, Yahweh, God or Allah.  Divinity has appeared to different cultures at different times, and used different people to send what is essentially one single message:  Worship me, and be kind to each other.  We are called to humility and service, truth and justice.

I am sixty-seven years old now.  My Social Security income is $834 per month; the federal government has me classified as “severely impoverished”.  I receive Medicare, Medicaid, Food Stamps and HEAP.  I live in a two-room, 540-square-foot, HUD-subsidized apartment, sleep in a hospital bed and travel in a power wheelchair.  Home health aides are supposed to care for me every day, but I can’t get any.  I have a safe apartment, healthy food, clean clothes and a warm bed.  That makes me more privileged than most of the world’s people.

It is well with my soul.